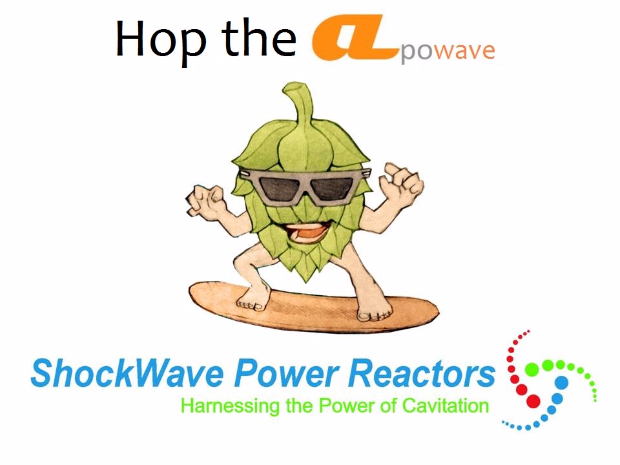 The launch of the ApoWave hop extraction technology marketing campaign began with bang with a highly successful presentation at the Master Brewers Association of the Americas (MBAA) Annual Meeting in Jacksonville, FL on October 8, 2015.  Mr. Santiago Gomez of Apotek Solutions LLC (Apotek) delivered a talked entitled, “Use of microscopic pressurized shockwaves generated by controlled cavitation as a non-shear method for increased extraction of alpha acids and oils from hops”.  The talk was attended by approximately 150 brewing professionals from across the country and detailed the ability of the ShockWave Power Reactor Technology (SPR) to increase the amount of alpha acids extracted from hops, a common flavoring in beer.  The talk was very well received and stimulated a great deal of conversation around the potential savings and unique brews that better hop utilization could provide.

To coincide with the presentation, the companies introduced a new slogan and marketing logo with the “Hop the ApoWave” campaign.  The logo plays off the hops, the SPR and Apotek’s name.  This new logo was placed on thousands of postcards for mailing to breweries along with clothing for employees and customers.  The companies will be publically announcing the places you can enjoy a cavitated beer shortly as commercial production with the technology begins at several locations.

The ApoWave technology is based on the SPR Cavitation Technology by Hydro Dynamics, Inc. (HDI).  The SPR harnesses the normally destructive power of cavitation and controls it so its pressure fluctuations can be used for increased extraction.  With the proliferation of microbreweries the demand for hops and the prices have increased.  When the SPR technology is applied to the different processes within the brew-house, combined with expertise in hop utilization, it allows brewing customers to produce bitter beers with 50% to 90% less bittering hops and 50% to 75% less aroma hops for dry hoping.  HDI has partnered with Apotek to market our SPR technology to the hops industry.

Hydro Dynamics, Inc. is located in Rome, Georgia and is the developer and manufacturer of the cavitation based ShockWave Power Reactor (SPR). The SPR equipment uses the

Physical phenomenon of cavitation, normally known as destructive force, and harnesses it to solve critical industrial mixing, extraction and heating problems. The technology The SPR can now be found on four continents in applications ranging from biodiesel production to hops extraction for beer. Learn more at: www.hydrodynamics.com.

Apotek Solutions LLC was formed by a group of Engineers and process experts with more than 50 years of combined experience in the food and beverage industry.  Apotek specializes in applying new and unique technologies to current process systems for cost reduction, product improvements or development of products that were not previously available due to process limitations. From improvements to existing product lines to complete turn key operations, we have installations throughout the Unites States, as well as countries such as Brazil, Chile, Colombia, UK, Turkey, Italy, Hungary, Switzerland, Finland, Saudi Arabia, Honk Kong, Thailand and Taiwan among others.   Learn more at: http://www.apoteksolutions.com.

PDF Version of the Release