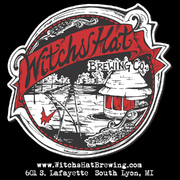 South Lyon, MI – Hydro Dynamics, Inc, would like to announce that its technology integrated into the ApoWave© hop extraction technology will have its first commercial brewery installation at Witch’s Hat Brewing Company in South Lyon, MI.  Witch’s Hat’s award winning beers are sold around Michigan as well as its own bar at the brewery.  The ApoWave© equipment is expected to be installed in the next couple weeks with the first “cavitation” beers available shortly after.

Witch’s Hat Brewing Company was the first brewery to conduct onsite R&D with the ApoWave© technology, so it is very fitting that they will also be the first commercial location.  Brewing since 2011, Witch’s Hat is known for its exceptional commitment to quality beers, especially its Train Hopper IPA.  Ryan Cottongim, co-owner of Witch’s Hat stated, “We are very excited to introduce the Apowave© unit into our brewery.  Our customers, along with the rest of the craft beer world, are always on the hunt for the hoppiest beer out there.  We hope that this unit will allow us to continue to push the boundaries of what a hoppy beer is and to do it without being wasteful, especially considering the rarity and shortages with hop varieties."

The ApoWave© technology is powered by the ShockWave Power™ Reactor (SPR™) cavitation technology by Hydro Dynamics, Inc. (HDI) and marketed by Apotek Solutions LLC (Apotek).  The SPR™ harnesses the normally destructive power of cavitation and controls it so its pressure fluctuations can be used for increased hop flavor extraction.  With the proliferation of microbreweries the demand for hops and the prices have increased.  When the SPR™ technology is applied to the different processes within the brew-house, combined with expertise in hop utilization, it allows brewers to produce bitter beers with 50% to 90% less bittering hops and 50% to 75% less aroma hops for dry hopping.

PDF Version of the Release