The ShockWave Power™ Reactor (SPR™) cavitation technology will have its first commercial distillery installation at White River Distillers in Enumclaw, WA. The SPR™ can significantly accelerate and catalyze liquor aging, allowing flavor transitions that often take years to develop to happen in minutes to days.

Using the force of cavitation, the SPR™ can significantly accelerate and catalyze liquor aging, allowing flavor transitions that often take years to develop to happen in minutes to days.  The SPR™ harnesses the normally destructive power of cavitation and controls it so its pressure fluctuations can be used to provide accelerated aging of liquors and spirits.  This is accomplished by extracting flavors and color from wood chips entrained in the fluid flowing through the equipment as opposed to traditional static barrel aging.  This same action can also be used to extract flavor from fruits, spices and other flavor sources.  Cavitation can also assist in the expedited breakdown and removal of natural harsh flavor compounds naturally found in spirits that also deteriorate as part of traditional aging.

The ApoWave™ technology is powered by the ShockWave Power™ Reactor cavitation technology by HDI and marketed by Apotek Solutions LLC (Apotek).  The craft distillery market is expanding rapidly like craft brewing before it and ApoWave™ can provide distillers unique process advantages.  In distilled spirits the ApoWave™ technology can allow new distillers to sell dark/brown liquors immediately rather than waiting for years of aging.  The distiller may also see a drastic yield increase due to not having the evaporative loss associated with traditional aging.  Distillers also can experiment with new and seasonal flavors with the ability to see near immediate results. 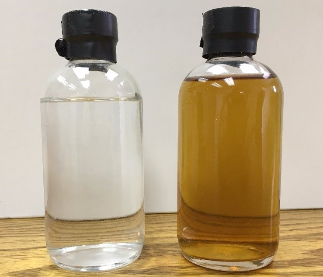 ApoWave processed liquor before and after only 15 minutes.
About Hydro Dynamics

At White River Distillers, we source only locally grown, whole ingredients sourced from farmers we know personally; whose hands we’ve shaken; whose dinner tables we’ve shared. And we take the time to do it right, putting as much care and concentration into each and every spirit as we put into the richness and fulfillment of our own lives.  White River Distillers creates handcrafted spirits that enhance today’s experiences, becoming tomorrow’s memories.  White River Distillers is located in Enumclaw, WA and will open to the public in April 2016.  Learn more at: http://whiteriverdistillers.com/