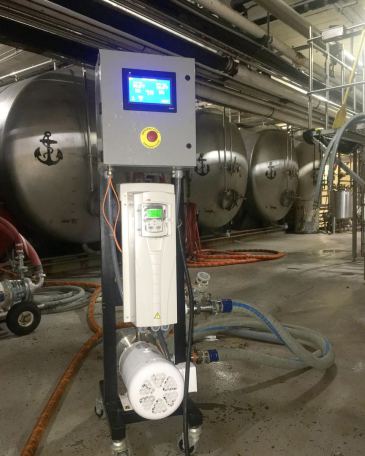 San Francisco, CA – Hydro Dynamics, Inc, (HDI) would like to announce the installation of its hop ShockWave Xtractor™ extraction technology at Anchor Brewing in San Francisco, CA.  Anchor’s Blackberry Daze® IPA will be their first beer made with the technology using the ability of the technology to extract more flavor during dry-hopping and from the fruit.

Brewing since 1896, Anchor beers can be found all over America and internationally.  Anchor Brewing has a beautiful copper brewhouse and uses the “time-honored art of classical craft brewing with carefully applied, state-of-the-art modern methods.” Anchor has also been a craft brewing pioneer, being the first American brewery to use the now common brewing technique of dry-hopping.  Doug Mancosky, VP of R&D at HDI stated, “We are delighted that our technology has found a home in Anchor’s historic brewery located in the vibrant California craft beer market.  Anchor’s mix of tradition and technology makes for some amazing beers.“

The cavitation technology is manufactured by Hydro Dynamics, Inc.  The ShockWave Xtractor™ harnesses the pressure fluctuations of cavitation to improve extraction and increased hop flavor.  With the proliferation of craft breweries, the demand for hops and prices have increased.  The ShockWave Xtractor™ technology can allow brewers to produce bitter beers with up to 50% less hops, both bittering and aroma hops for dry- hopping, as well as improve the extraction of fruits, spices and other flavors.

Hydro Dynamics, Inc. is located in Rome, Georgia and is the developer and manufacturer of the cavitation based ShockWave Xtractor™ Technology. The ShockWave Xtractor™ equipment uses the physical phenomenon of cavitation, normally known as destructive force, and harnesses it to solve critical industrial mixing, extraction and heating problems. The technology can now be found on four continents in applications ranging from biodiesel production to hops extraction for beer. Learn more at: www.hydrodynamics.com.