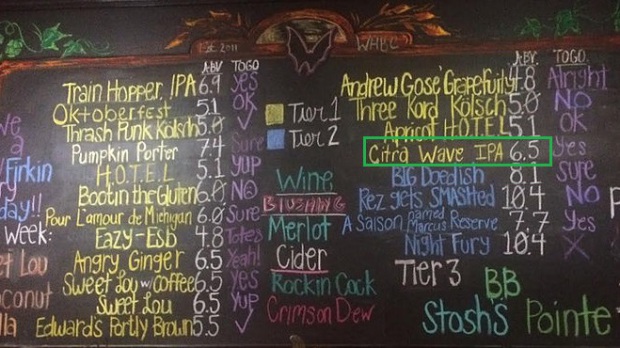 South Lyon, MI – Hydro Dynamics, Inc. (HDI) would like to announce that the first specialty commercial beer produced using its hop extraction technology is available at Witch’s Hat Brewing Company in South Lyon, MI.  The beer is called Citra Wave, playing off of ShockWave, and it is a East Coast IPA made with citra hops and using the enhanced extraction capability of the ShockWave Xtraction™ Technology to assist in dry hopping.  With the ShockWave Xtractor™ technology Witch’s Hat Brewing Company is able to use 30% less of these expensive and often difficult to find hops.

Both citra hops and East Coast IPA’s are increasing in popularity.  East Coast IPA’s are known for their relatively mild bitterness compared to their East Coast cousins, but their heavy hop aroma and often hazy appearance due to large amounts of dry hopping.  Citra hops are a current favorite among beer fans with demand so great that the Wall Street Journal recently wrote an article about shortages.

Brewing since 2011, Witch’s Hat Brewing Company beer can be found all over southeastern Michigan.  They were also the first brewery to conduct onsite R&D with the ShockWave Xtraction™ Technology and now are the first to offer a specialty beer using the technology.  Doug Mancosky, VP of R&D at HDI stated, “We are so happy to see things come full circle at Witch’s Hat, from being the first place we did R&D to now purchasing the technology and creating a great cavitation inspired beer.  Witch’s Hat is at the forefront of craft beer and their constant experimenting will no doubt lead to some amazing brews in the coming years.”  In addition to Citra Wave, Witch’s Hat Breweing Company also uses their Xtractor on their signature Train Hopper IPA and other brews.

The cavitation technology is manufactured by Hydro Dynamics, Inc. and was installed by Apotek Solutions LLC, (Apotek), HDI’s development partner in the hop extraction application deployed at Witch’s Hat Brewing Company.  The ShockWave Xtractor™ harnesses the normally destructive power of cavitation and controls it so its pressure fluctuations can be used for increased hop flavor extraction.  With the proliferation of craft breweries the demand for hops and the prices have increased.  When the ShockWave Xtractor™ technology is applied to the different processes within the brew-house, combined with expertise in hop utilization, it allows brewers to produce bitter beers with up to 50% less bittering hops and aroma hops for dry hopping.

Hydro Dynamics, Inc. is located in Rome, Georgia and is the developer and manufacturer of the cavitation based ShockWave Xtraction™ Technology. The ShockWave Xtractor™ equipment uses the physical phenomenon of cavitation, normally known as destructive force, and harnesses it to solve critical industrial mixing, extraction and heating problems. The technology can now be found on four continents in applications ranging from biodiesel production to hops extraction for beer. Learn more at: www.hydrodynamics.com.